Kitchens are the heart of the home. However, they are also expensive to design and refurbish. Therefore, when you are going to plan this sort of task, you need to have some excellent ideas of what you are going to do. For those reasons, here at The House Wire, we have compiled some timeless, mid-century modern kitchen ideas.

The development of the mid-century modern decor style began in the mid 20th century. Hence the name, mid-century. This design approach is a much more widespread one than you may first think, with interior designers worldwide proclaiming that this decor style will never go out of fashion.

If a timeless, mid-century modern style is what you like, (and why wouldn’t it be?) then take a look through these images, and turn your kitchen into the MCM style that you are looking for now.

This article is the first installment of a mid-century modern series that we are going to be doing, so make sure to keep an eye out on our homepage to see more as we post them. 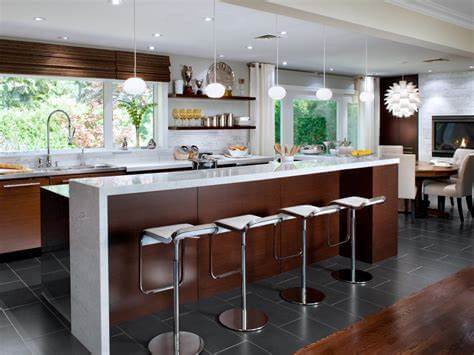 One of the first things that you see in a kitchen is the fascias of the cabinets and cupboards. They often take up much more of the space than anything else. Therefore, we think that it is imperative to get this right. If the style of this part of your kitchen is out of place, it will only make all of your other efforts wasted. 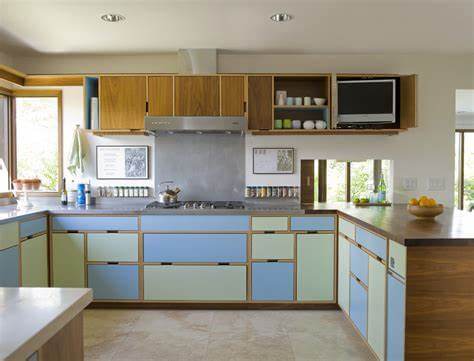 Mid-century modern kitchen cabinets are easier to get right than you may think. You can let your imagination go wild with them. In this image, for example, the designer has used pastel blues and greens. At first glance, it looks as though the colors have been put in a bit sporadically. However, at closer inspection, you will see the classic feature of symmetry popping out. The wooden clad or veneered carcasses and high-level doors only add to the MCM look.

When you are choosing what cabinet styles you want to go for, remember the color pallets used in these times. MCM used a lot of bright and bold, yet pastel colors in ways that you may never think of now.

Of course, it is not only your cabinets that you will have to change if this is the look that you wish to achieve. You have to try to remember what will be in the kitchen that will draw your attention. While the cabinets are one of the main things that will do this, a mid-century modern kitchen table is going to be a very close second. 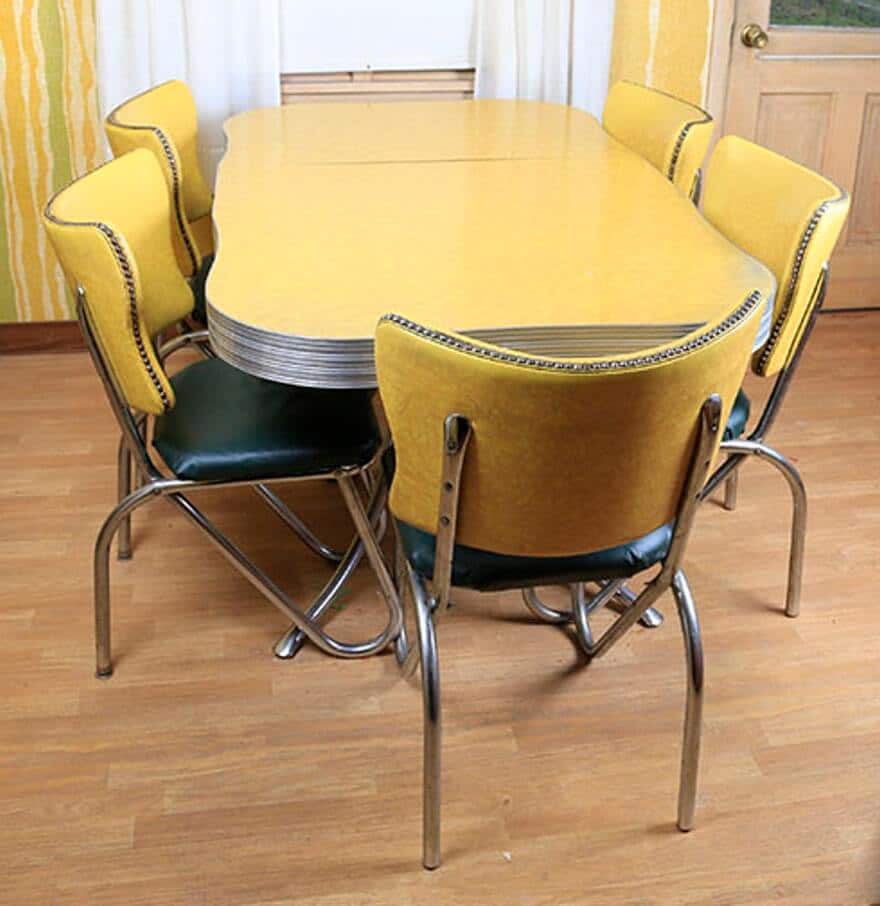 Remember what I have just said about the colors used in this style? Bold yet pastel? Here we have another perfect example of this. I honestly am not sure if there is another design style that is so broad that it would allow a bright yellow mid century modern kitchen table. However, this one does. It is not just the bright yellow that is so MCM here though. Take a closer look at the table and chairs, and you will notice a few other MCM styles:

Perhaps you have had a look at kitchen tables and decided that you would instead opt for a mid-century modern kitchen island. If you have the room for one of these, then I would even suggest that you do. Although the island in the picture does not have them, you can have islands with added storage space in them. We all know how storage space is at a premium in most kitchens, and you do not get any with a table. 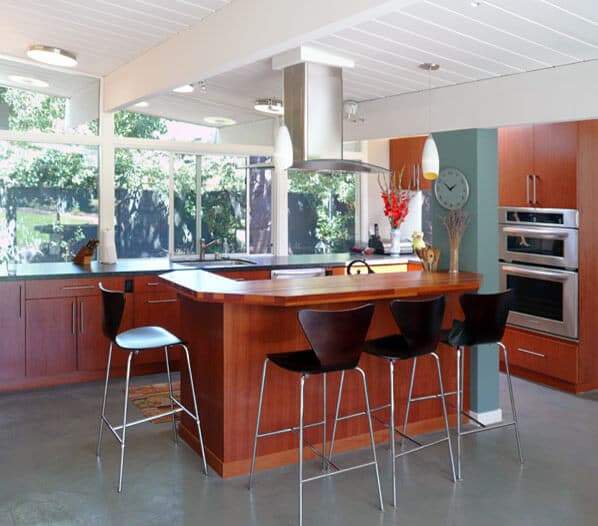 The use of dark wood is another staple of the MCM decor style. However, it seldom got used at the time. The use of veneer can still help us, mid-century modern decor lovers, today. It means that the design styles of the time can be replicated with ease and at a relatively low cost. Just remember to incorporate the same shade of veneer into other areas of the kitchen as to not have only one item in that color.

Often, an overlooked aspect of many design ideas is the lighting. It is too easy to stick with the standard light fittings that were in the room at the time of design. However, the effect of changing them can be tremendous. 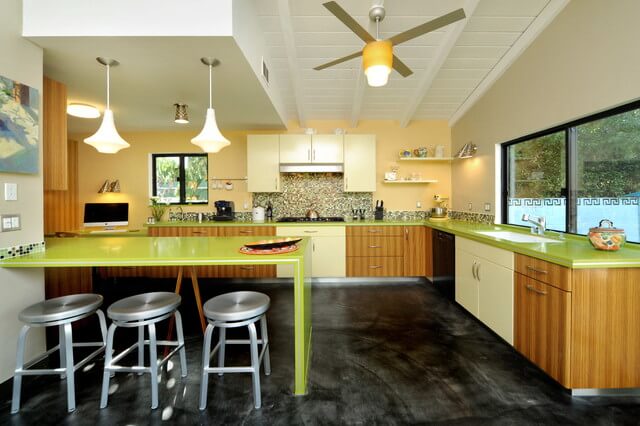 In the image here, the use of acrylic has been used to maximum effect. You can still see the aspects that I have already been talking about in this article. Brushed aluminum stools, wooden veneer cabinets in two different colors, and the alternating of those colors. Nonetheless, it is the lighting that we are concentrating on here. There are four styles of MCM lighting just in this one picture:

The decor style of MCM allows for multiple types of all aspects of design. Therefore, even having four forms of light in one room does not look out of place.

If you have chosen an island for your kitchen, then, likely, you will not have matching furniture. That is why you will need to think about incorporating some mid-century modern chairs to go with it.

This image is only a small view of the world of MCM chairs. However, they would look great at a kitchen island. The use of two-tone wood and fabric starts the look off. However, what gives them the mid-century modern look is the use of the curved back and the different colors on the seat pad. Again, there is no real need to think about which colors will match in your kitchen. It was almost a time where mix and match was the style.

Mid-century modern kitchen ideas have been at the forefront of many great designers thoughts for many years. There are even stores that base their whole sales on this style. Therefore, when you are thinking of this style for your kitchen, there are many places to find inspiration.

A couple of points that you need to try and remember though are:

I hope that this has helped a little. Remember to leave comments below if you have any other ideas and if there is anything that you would like us to write an article about here. We will do posts that go further in-depth into mid-century modern, so remember to keep your eye out.

Also Worth Your Time 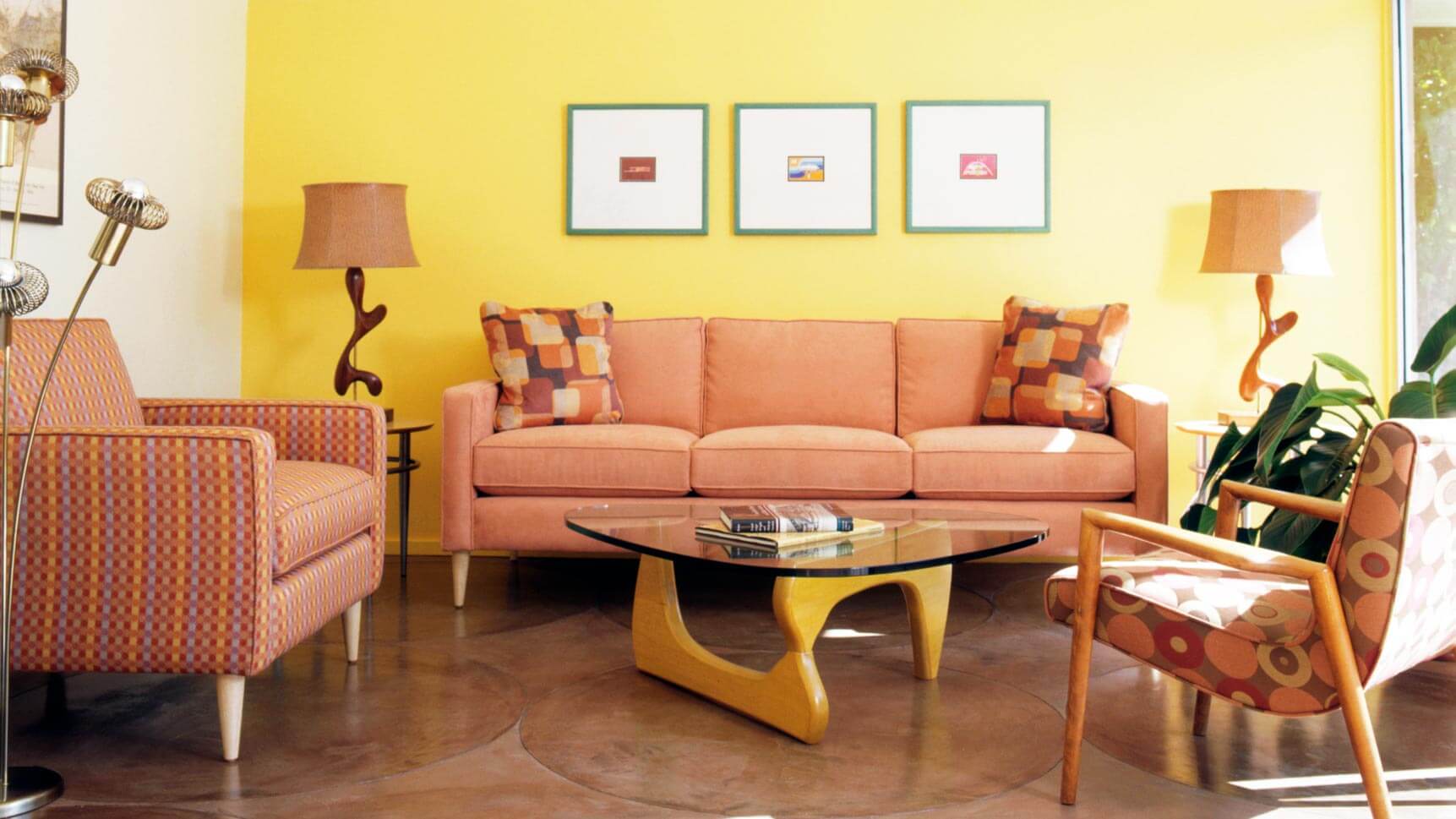 5345 home owners can't get wrong. Benefit also from all of our tips and DIY. Today.

© Copyright 2020 by The House Wire
×
2 Shares
Tweet
Share
Share2
Help to prevent the spread of coronavirus. For the latest information on COVID-19, go to the CDC's website.Ok